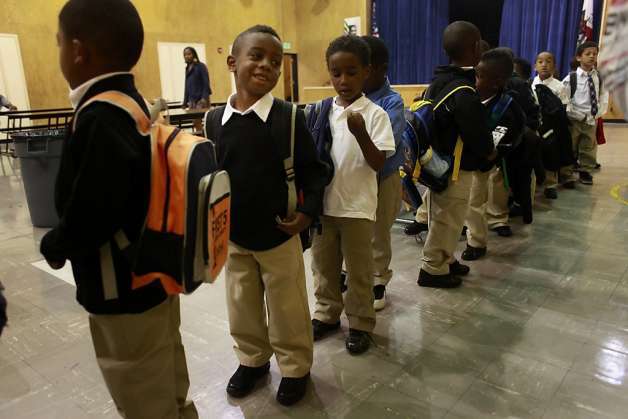 Why do you think so many Black boys are not doing well in schools today? What are the forces pushing them out?

There are a lot of different factors. A lot of it stems from, if we think of race and its intersectional identities as social constructs, the way we’ve constructed Black boys as anti-intellectual. This is important because unless we’re super aware and reflective of those social constructions, it creates a “common sense” for what’s going on.

That causes a few issues. It lowers the bar for Black men in terms of what we expect from them in schools. So we’re not pushing Black students, men in particular, to do highly rigorous intellectual work, because we either don’t think they can do it or don’t want to “set them up for failure.”

On the behavior side, equivalent actions by Black men and boys is perceived differently. So when little Henry, who’s a white kid, runs around at recess acting a fool, it’s just cute, but as soon as a little Black boy does something, looks at someone the wrong way, bumps into someone, it becomes a problem. I know a lot of Black boys and young men who are in classrooms where they feel that they engage in the same behaviors as other folks, but as soon as they talk out of turn or ask a question that’s seen as challenging the teacher, it’s seen as oppositional or combative.

Even things like dress policies. In a lot of schools, there might be a no headgear rule. Which, putting aside religious headgear, there are plenty of girls walking around with a scarf on their head or something and it’s not seen as an issue. But as soon as a Black boy comes into a classroom with something like a baseball cap on or a do-rag, it’s seen as something that’s going to get in the way of their learning, or everybody else’s learning, which I’m still trying to figure out.

So I think we have these ideas or concepts of Black men and boys that creates this “common sense” that says they’re not intellectual, and we’re surprised if they are, and they become exceptional if they are.

Then, this hyper-focus on what they’re doing with their bodies or their mouths creates a disproportionate impact on them in terms of what we call classroom management or behavior management.