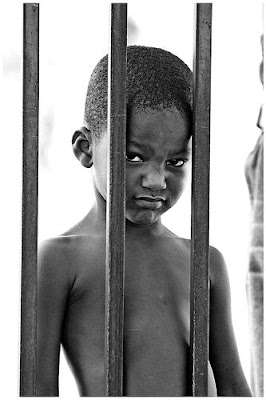 *This article is an excerpt from Mr. Anderson’s book, ‘Targets of Oppression: Speech Essays On The Crisis of Black Men in America’.

In his book, “The Myth of Male Power”, popular male issues author, Warren Farrell states: “The Black man is sometimes called an endan­gered species but receives little of the protection an endangered species is normally accorded.”

Many social analysts have looked at the quality of life data on Black men, concluding our future looks bleak. Many economists refer to Black men as be­coming economically obsolete in America due to domestic immigrant workers and international cheap labor.

The two words ‘endangered’ and ‘obsolete’ are powerful, grim terms de­scribing our fate. According to a report of the National Criminal Justice Commis­sion on Imprisonment and Race; if current incarceration rates continue, by the year 2020 – 63.3% of all Black men in the U.S. ages 18-34 will be behind bars.

The fact that so many Black men end up jobless or in prison is not sur­prising to scholars like Jewelle Taylor-Gibbs; for her, Black males in America are ‘at-risk’ from inception:

Indeed, from birth too many Black males lives are in jeopardy. From my perspective, psychologically speaking, most Black males are socialized with en­dangering traits, which results in self-defeating and self-destructive behaviors that compounds the external racial oppression that jeopardizes their lives.

As a social work psychotherapist, who has provided behavioral prevention and intervention services to at-risk Black male youth for over 20 years, I’ve wit­nessed first hand the negative consequences of these jeopardizing traits. I’ve seen too many young Black males become teen fathers, under-achieve, drop out of school, use drugs, engage in criminal activities, end up dead, or incarcerated.

Based on the ‘psychological insights’ from my own socialization as a Black man and from my counseling experiences with young Black males, I’ve identified several jeopardizing traits that I define as the ‘S-Traits Syndrome’ (STS); words beginning with the letter S which provide psycho-analytical insights.

The S-Traits Syndrome is a group of socialized symptoms, self-limiting character traits that make up most Black males’ personalities. For time’s sake, there are nine S-Traits Syndrome terms, I will mention all of them, but I’ll only ad­dress three in some detail; the terms are:

From this list and from my experience and perspective, sportsmen, silli­ness, and sensationalizing have the greatest detrimental effects on adolescent Black males.

First, is the trait of sportsmen. When I interact with young Black males psycho-educationally in the classroom, the overwhelming majority are preoccupied talking about sports, particularly basketball. They’re constantly talking about pro­fessional basketball players in the NBA, Alan Iverson, Tracy McGrady, Lebron James, Carmelo Anthony, and others. They’re constantly talking about and trying to purchase the expensive jerseys and gym shoes these hoop stars wear. They’re not concerned with education, schoolwork, or homework. They’re concerned with playing basketball in gym during school and playing after school; as H. Rap Brown stated:

“So to us the most important thing was to excel in athletics. Recess was the most essential part of the school day, for we could practice our skills. One play could make or break you. We all lived for the big play. For many it never came.”

At home, Black boys spend significant time watching basketball on televi­sion, or playing basketball video games. In his excellent book, “Hooked On Hoops”, author Kevin McNutt provides a psychological reason why so many young Black males are consumed with basketball, he says:

“The rewards and jubilation of the game, the made basket, are immediate, simple, definite, quick, and repetitive. When you contrast that with the struggles of day-to-day survival that Black youth face with invisibility, hopelessness, and low self-esteem, it becomes quite clear how an es­cape to the neighborhood playground is neces­sary just to make it through the day.”

According to a study done by Northeastern University’s Center for the Study of Sport in Society, two-thirds of all African American males between the ages of 13 and 18 believe that they can earn a living as professional athletes. This is a stunning statistic, considering that the actual chance of a high school athlete ever playing at the professional level is slim.

In his book, “Darwin’s Athletes: How Sport Has Damaged Black America and Preserved the Myth of Race”, John Hoberman, a historian at the University of Texas, argues that a growing obsession with professional sports among young African American males is destroying Black America. The root of the problem, he writes, is that:

“Black athleticism has complicated the identity problems of  Black Americans by making athletes the most prominent symbols of African American achievement.”

This obsession with ‘hoop dreams’ causes so many young Black male students to become one-dimensional, focusing only on basketball; minimizing their education; ignoring their other academic talents and potentials.

Second, is the trait of silliness. Conducting psycho-education sessions with young Black males today, I find the overwhelming majority of them extremely silly, constantly joking – everything is funny! Filled with laughter, their ‘over-humorous’ disposition makes them non-sensical and trivializing; lacking any seri­ousness about their schoolwork (studying, homework, test preparation, etc.), their behaviors, their plight, and their futures.

Often times being hilarious is a self-distraction from poor grades and learning problems. For them poking fun and buffoonery is more than immaturity and getting attention, it reflects the influences of influential Black male images to­day, comedians.

Black male comedians, comic actors, like Steve Harvey, Cedric the En­tertainer, Bernie Mack, D.L. Hughley, Shawn and Marlin Wayan, Jamie Fox, Martin Lawerence, Chris Tucker, and Chris Rock are dominant images on television. There is also the very popular, ‘Comic View’ on Black Entertainment Television (BET), hosted by ‘Bruce-Bruce’. Young Black males’ minds are saturated with Black male comedy, so there is no surprise that they want to ‘clown’ all the time in school. According to psychologist Naim Akbar, the pervasive clowning attitude of young Black males, though more extreme today, is nothing new, their behavioral root is the slave plantation; as Akbar highlights:

“Another serious handicap which we inherited from slavery is the African American clown. One of the primary forms of remaining in favor with the slave master by the slave was to provide entertainment for the master and his household. It is easy to observe that man exults in his supe­riority over lower animals by teaching them to do tricks and being entertained by those tricks. In much the same way, the slave owner prided himself in his superiority by being entertained by the slave. Writers have long pointed to the jester, the clown, or the fool, as the inferior one who was responsible for making his superior laugh. Using a person for your clown has always been one of the major ways to assert your dominance over a person. Mockery is one of the more so­phisticated forms of humiliation. Great favors of leniency and special rewards were given to the clowning slave. He enjoyed a special status above the other slaves because he kept his master entertained. Even the Arts, music and dance, which had originally been used for self-expression and community recreation, became devices that were used by the slave to protect himself from the master’s anger. Fiddler, in the TV drama “Roots”, was a colorful example of this manipulative function of the clown. Clowning and buffoonery became one of the primary ways that the violent and abusive slave master could be controlled and manipulated.”

Since slavery, Black men have also used ‘clowning’ as a survival defense mechanism. Adolescent Black males today, though not conscious of it, use con­stant joking in the same manner; to make light of the heaviness of racial oppres­sion; to ease tensions and burdens; and to laugh when they really want to cry.

Third, when the young Black males I counsel are not ‘full of jokes’, they are ‘full of fantasy’, sensationalizing. Daily I hear them lie, brag, boast, and over-exaggerate. This sensationalizing attitude is understandable due to the bombard­ment of their minds with the self-glorifying fantasy lyrics of rap music and rap vid­eos that show young Black males who are ‘ghetto fabulous’; who live the lifestyles of the rich and famous; who have all the beautiful and sexy women; who are larger than life crime bosses and ‘hard-core’ gangsters; who are arrogant and indestruc­tible.

“The term compulsive masculinity alternative de-scribes a compensatory adaptation that many lower-class Black males adopt to cover up their inability to meet the standards of the traditional masculine role. Since other symbols of masculin­ity have been denied to many Black males, the status conferral system in Black life attributes high levels of esteem to those males able to demonstrate their proficiency in fighting and sex­ual exploitation of Black women. But instead of being an effective strategy to cope with environ­mental stress such as racial discrimination, eco­nomic exclusion, and low self-esteem, the com­pulsive masculinity alternative is a dysfunctional compensatory adaptation. Rather than solving problems in the environment, it creates additional ones.”

Young Black males, like adult Black males, with sensational attitudes are based on inverted thinking: converting socio-economic powerlessness, depend­ency, and feelings of insecurity into an exaggerated sense of self. Indeed, this at­titude of exaggerated manhood creates personality problems.

According to the Diagnostic Statistical Manual of Mental Disorders (DSM), an exaggeration of the importance of one’s experiences and feelings is a clinical characteristic of Narcissistic Personality Disorder (NPD). Other characteristics of NPD that young Black males with sensationalized thinking exhibit are: grandiosity, preoccupation with fame, wealth, and achievement; and excessive emphasis on displaying beauty and power (‘living large’).

Moreover, sensational thinking young Black males like individuals with NPD are often envious of others and believe others to be envious of them (‘player-hating’). They also believe that they are superior and that others should give them deference (‘all that’ mentality).

Furthermore, many young Black males with sensational outlooks believe unrealistically they are ‘hard-core’, invincible (can’t be ‘touched’ or ‘faded’), result­ing in them living irrationally and recklessly; they usually wind up being shot, mur­dered, or imprisoned.

From my perspective sensational thinking, exaggerated manhood, like the other S-Traits, are not mental disorders in the typical DSM sense, but dysfunc­tional coping characteristics of reactionary Black manhood, like H. Rap Brown (Jamil Al-Amin) stated:

“So much of the life story of any Negro growing up in America is the story of what has been done to him and how he reacts to that. That’s it. White man acts. Negroes react.”

What has been done and continues to be done to Black men is racial op­pression, which is pathology producing. As Black men, we must struggle against the S-Traits Syndrome; this reacting behavior is self-oppressing and self-endangering.

We must struggle against, constructively criticize, and remove the domi­nant sportsmen, silliness, and sensationalizing S-Traits in young Black males so they won’t continue to self-perpetuate internal endangerment.

In ending, several years ago a white man, an animal activist, climbed a towering redwood tree in the Oregon forest to protest and prevent lumber compa­nies from cutting down more redwood trees that the endangered spotted owl in­habits. His committed activism led to the reduction of redwood trees being cut down.